Sushma Swaraj, the first woman to hold the post, has called the Jewish state ‘a reliable partner’ and admires Golda Meir 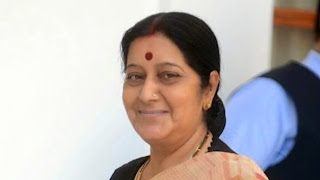 Sushma Swaraj, India’s newly appointed foreign minister, has in the past publicly defended Israel against naysayers, and is said to be a strong admirer of the late Israeli prime minister Golda Meir.

Swaraj, 62, the first woman to receive the foreign affairs ministerial portfolio, called Israel “a reliable partner” in 2008, according to theEconomic Times. The statement arose in the context of criticizing the left-wing parties’ opposition to the Israel-India diplomatic relationship. Swaraj came to Israel’s defense and asserted that the government recognized the significance of ties with the Jewish state as well.

Swaraj also served as chairwoman of the Indo-Israel Parliamentary Friendship Group from 2006 to 2009.

As the first female in that – and many other — political positions in India, Swaraj is said to look to Meir for inspiration. Like Swaraj, Meir had served as foreign minister under prime minister David Ben Gurion in 1956.

Swaraj boasts a long list of accomplishments in her 30-odd-year political career: At the age of 25, she became the youngest cabinet member India has ever voted into parliament; she was also the first female chief minister of Delhi and the first female political spokesperson.

Swaraj’s appointment, along with the election of Narendra Modi as India’s new prime minister, bodes well for Israel’s increasingly warm ties with its South Asian ally.

Prime Minister Benjamin Netanyahu made a congratulatory phone call to Modi following his victory in India’s national elections 10 days ago.

During the call, Netanyahu expressed his admiration for Indian democracy and the two leaders agreed to deepen cooperation between the two countries, according to a Reuters report.

Modi, who heads the Hindu nationalist Bharatiya Janata Party (BJP), “has long courted political and trade links with the state of Israel,”according to the International Business Times.

Modi had previously visited Israel as chief minister of Gurajat province, a position he held since 2001. During the trip, he suggested that, “as the possible next prime minister, he could make history by journeying to the Jewish state,” the report read.

“Modi’s ties to Israel, which BJP officials strongly endorse, has turned into a financial bonanza for the western Indian province of Gujarat, where he has served as chief minister for the past 13 years,” the report said.