After his six notorious years as the UN Human Rights Council’s permanent investigator of “Israel’s violations of the principles and bases of international law,” term limits will soon — finally — put an end to the term of Richard Falk, whose inflammatory and racist comments earned him multiple condemnations from UN Secretary-General Ban Ki-moon, the U.S., Britain and Canada.

The 47-nation council, which just welcomed China, Cuba, Russia and Saudi Arabia to its ranks, will be replacing Falk — an open supporter of Hamas and of 9/11 conspiracy theories — at the end of its upcoming March session.

And so like moths to a flame, a rogues’ gallery of anti-Israel activists and academics are clamoring to take over a position that, evenaccording to Amnesty International, is inherently biased against the Jewish state.

While the title of the post is “Special Rapporteur on the situation of human rights on Palestinian territories occupied since 1967,” implying a regional jurisdiction, in fact the mandate – unchanged since February 1993 — is unique in the UN system for its exclusive focus on alleged abuses committed by one side, Israel; and by the presumption, in contempt of basic due process, that Israel will always be found guilty.

By contrast, violations of human rights committed by the Palestinian Authority, Hamas, Islamic Jihad — be it terrorism against Israelis or oppression of fellow Palestinians — are entirely excluded.

The UNHRC’s rules are clear: only Israel gets investigated, only Israel gets condemned. If the council applies the same selection criteria it used to appoint Falk, following are the leading candidates. 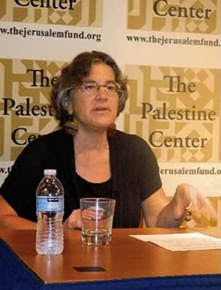 Number one is unquestionably Phyllis Bennis, an avowed “colleague and friend” of Falk. Bennis is not shy about her views. “Israelis will take Jews from anywhere,” she says.

“Their preference is white, educated, violin-playing surgeons, but they will take Ethiopian peasants if need be, if that’s all that’s available.”

In her application for the UN job, Bennis reveals that she “worked on a voluntary basis” with Falk, accompanying him in the Palestinian territories, and assisting in “conceptualizing and drafting several of his reports.”

These reports were so pro-Hamas that the Palestinian Authority actually blocked Falk from presenting one of them, and secretly tried to fire him.

“My goal is to continue the extraordinary work Richard has done, and on which I’ve been privileged to collaborate with him,” says Bennis.

One of the Falk-Bennis collaborations was an article attacking a UN panel that dared to uphold the legality and security justifications of Israel’s naval blockade of Gaza. “It is a sad day for both the global rule of law and the well-being of some of the most vulnerable and abused people on the planet,” they wrote. 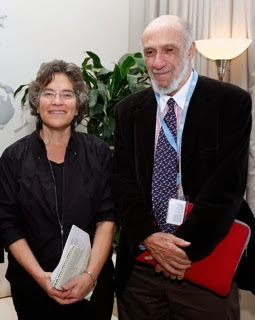 (Above: Phyllis Bennis with Richard Falk.)

When UN Watch got Falk expelled from his position at Human Rights Watch, Bennis defended him as “scrupulously fair.”

She pointed the finger at UN Watch for “undermining and delegitimizing Richard Falk,” saying it was “pretty rare for Special Rapporteurs to face condemnation, insult, and attack from high-ranking UN officials, including the Secretary-General, or powerful diplomatic actors from their home country — such as US representative to the UN, Ambassador Susan Rice.”

It’s important to recall that Falk was chosen not only because he was zealously anti-Israel, but also because he was, in the words of the Palestinian representative, a “Jewish professor.”

When Falk accused Israel of planning a “Palestinian Holocaust,” he made sure to invoke his authority “as an American Jew.” Bennis is also Jewish, giving her application an advantage in the eyes of Israel’s clever detractors. 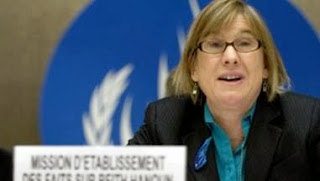 London School of Economics professor Christine Chinkin applied for the same post back in 2008, and was shortlisted in second place after Falk. Her chances this time have only improved given her record as one of the key authors of the infamous Goldstone Report, a document that effectively exonerated Hamas while excoriating Israel.

When Judge Goldstone later retracted the core accusation of the report, Chinkin joined with the two others to accuse him in all but name of misrepresenting facts in order to cast doubt on the credibility of their joint report.

Chinkin first made her name at the UN by serving with Archbishop Desmond Tutu on the HRC’s 2006 inquiry into the deaths of 19 Palestinians killed in Beit Hanoun by errant Israeli shells. It is widely recognized that Chinkin oversaw the work of the panel.

UN High Commissioner for Human Rights Louise Arbour had initially tried to convince Canadian MP and law professor Irwin Cotler, a former justice minister, to serve on the inquiry. He immediately declined, however citing the one-sided mandate, which “violated the presumption of innocence.”

“How could one accept a fact-finding mission with a prior determination of guilt, a kind of Alice in Wonderland inquiry, where the conviction was secured and the sentence passed even before the inquiry began?” Professor Cotler later said in a speech before the council plenary.

Yet Chinkin had no problem accepting and indeed embracing this mission, which, in Cotler’s words, “deliberately ignored Palestinian rocket attacks on the Israeli city of Sderot that preceded Israel’s actions.”

But it was her similar service on the equally biased HRC mandate given to the Goldstone Commission where Chinkin achieved notoriety, earning her a rare rebuke from one of her British legal colleagues. On January 11, 2009, during the Israel-Gaza conflict, the Sunday Times published a joint statement signed by Chinkin that declared Israel to be the aggressor, and a perpetrator of war crimes.

The letter began by “categorically rejecting” Israel’s right to claim self-defence against Hamas rocket attacks, “deplorable as they are.” The statement was devoted to the thesis that Israel was guilty — of the very accusations that the Goldstone Commission was meant to impartially examine. (See the article at p. 26 here.)

Asked about this by UN Watch during a May 2009 meeting with Geneva NGOs, Chinkin denied that her impartiality was compromised, saying that her statement only addressed the question of aggression, but not war crimes, which was the issue examined by her UN panel. But this was entirely untrue.

In fact, her statement not only determined that “Israel’s actions amount to aggression, not self-defence,” but additionally that they were “contrary to international humanitarian and human rights law,” and constituted “prima facie war crimes.”

While the commission was conducting its work in the summer of 2009, UN Watch submitted a detailed request for Chinkin to recuse herself. This was summarily dismissed by her Commission as a “so-called petition.”

Yet the argument in UN Watch’s request was entirely upheld in an articleon the Goldstone Report by Sir Nigel Rodley, Chairperson of the UN Human Rights Committee and a fellow English academic. While expressing general appreciation for Chinkin, Rodley openly criticized her failure to recuse herself from the mission, saying “there was regrettably a basis for questioning the appearance of bias” as a result of her public letter.

“If such a statement were made by a member of a standing fact-finding body,” wrote Rodley, “it could be expected that such a member would move to recuse himself or herself from the hearing of the issues.”

Chinkin was also criticized by a larger group of academics assembled by Chatham House, which, in diplomatic but unmistakable language, rebuked her by emphasizing that ”fact-finding missions should avoid any perception of bias,” that its members should not “act in a way that would damage their impartiality,” and should “therefore exercise great care when writing or speaking on international disputes that could potentially be subject to an investigation.” 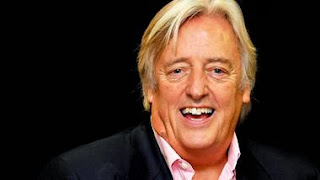 British lawyer Michael Mansfield’s claim to fame is having served on thejury of the “Russell Tribunal on Palestine,” which, according to a New York Times op-ed by Judge Richard Goldstone, was a kind of Stalinesque show trial with one-sided evidence, composed of jury members “whose harsh views of Israel are well known.”

As an attorney, Mansfield defended the Palestinian bombers convicted for attacking Israel’s London embassy in 1994.

In frequent publications for the Guardian, he has lobbied for the activists of the 2010 Turkish-led flotilla days before they deliberately provoked a violent clash with Israel; condemned the U.S. for its apparent “extra-judicial killing or assassination” of Bin Laden; and described the election of Muslim Brotherhood leader Mohammed Morsy as “a new dawn of democracy and human rights for Egypt.” 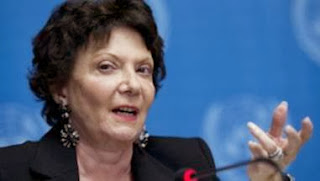 Christine Chanet is a French judge and longtime member of the UN Human Rights Committee. Like Chinkin, she also has a troubling record of serving on a biased HRC inquiry against Israel, established by non-democracies and lacking legitimacy.

In 2012, Chanet headed the HRC’s sixth inquiry into alleged Israeli violations, this time concerning settlements. UN Watch expressed concerns over the probe’s lack of balance, noting the mandate’s failure to address any violations by the Palestinian side.

Chanet failed to acknowledge that the terms of her HRC inquiry only examined Israeli actions and how they impact the human rights of Palestinians; that instead of acknowledging human rights victims on all sides, the inquiry’s mandate was one-sided and lacked credibility; and that the verdict was declared in advance, with the resolution deciding from the outset that settlements constituted “very serious violations” of “the human rights of the Palestinian people.”

UN Watch was shocked to discover that its own detailed and substantial written submission to the fact-finding mission – a 54-page document with 257 footnotes – was summarily ignored. Chanet, as head of the panel, bears responsibility for this refusal to examine information that provided essential context.

Finally, as a member of the UN Human Rights Committee, Chanet in 2010 accused Israel of “total discrimination,” stating that “it is very difficult to have a real dialogue (with Israel).” Her comments do not reflect the impartial attitude and approach required under UN rules for special rapporteurs. 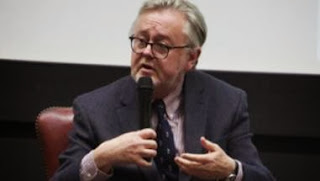 William Schabas, author of numerous textbooks on international humanitarian law, and former chairman of a UN human rights fund, has a long record of political attacks on Israel and apologetics for Iran.

In 2011, Schabas went to Iran to speak for and co-sponsor various conferences with the Tehran-based “Center for Human Rights and Cultural Diversity,” despite its intimate ties with the fundamentalist regime, and avowed propaganda agenda.  The center’s director, Kamran Hashemi, a former political officer with Iran’s foreign ministry, wrote his Ph.D under Schabas at the Irish Center for Human Rights.

In his 2009 blog post about the UN’s infamous Durban II conference on racism, as I pointed out here, Schabas urged the world not only to “ignore” Iranian President Mahmoud Ahmadinejad’s statements, but to stop “exaggerating”  them. 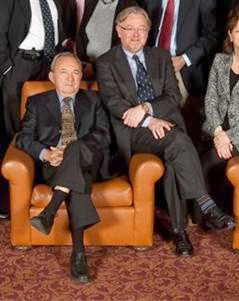 According to Schabas, who was very close with and gave an honorary doctorate to Richard Goldstone (see photo above), the enemy of human rights is someone altogether different:

[S]everal actors deserve the blame for the problems: Israel and its friends, who have manipulated the truth about the nature of the work of the United Nations by gross exaggeration of the role and intervention of certain fanatics…

For Schabas, Ahmadinejad was merely a “provocative politician,” not a barbaric murderer of his own people, inciter of genocidal anti-Semitism, or arch-sponsor of terrorism in the Middle East. 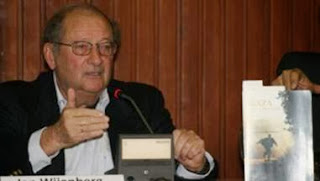 Johannes Jacobus Wijenberg, also known as Jan Wijenberg, is a former Dutch ambassador to Saudi Arabia. According to an article in theElectronic Intifada, Wijenberg regularly writes to Dutch ministers and politicians urging them to “hold Israel accountable to international law.”

In Wijenberg’s opinion, reports the article, “the European Union and the Netherlands have become an instrument of Israel’s foreign policy.” He believes Europe can play a “key role” by imposing “heavy sanctions against Israel.” In addition:

·         In 2010, he signed a petition calling for Obama to condemn Israel for the Flotilla incident, adding “If you dare to face down AIPAC, you deserve a place of honour as president of the free people in the world. If not, forget your legacy.”

·         In 2012, Wijenberg was a featured speaker at Qatar’s “International Conference on Jerusalem.” His topic: “Jerusalem and the Israeli Violations.”