Human rights organization Oxfam thought it a good idea to jointly host a Gaza-themed exhibition with the trustee of an alleged Hamas-linked organization, in a mosque notorious for being "one of Europe's most notorious platforms for hate."

They have now backed out, due to some problematic comments by their co-host (hat tip: Steve). 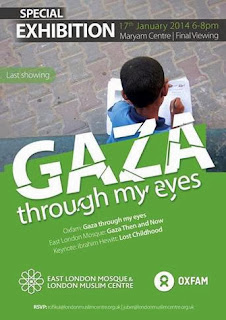 Oxfam has cancelled an exhibition which was due to take place on Friday after Left Foot Forward presented information to the charity detailing homophobic and potentially anti-semitic comments made by one of the organisers.

The 'Gaza: Through my Eyes' exhibition was due to be hosted by Oxfam and Ibrahim Hewitt, a trustee of Hamas-linked organisation Interpal who has called for the punishment of apostates and homosexuals.

Mr Hewitt has previously referred to the "so-called Holocaust" and has demanded that homosexuals suffer "severe punishments" for their "great sin".

The event was scheduled to take place at the East London Mosque, notorious for hosting a number of extremist speakers.

Speaking to Left Foot Forward, Oxfam said it was "strongly committed to upholding universal human rights" and would therefore be cancelling the event.

"We believe that nobody should face discrimination due to their sexual orientation. We are concerned at comments about homosexuality attributed to Mr Hewitt, of which we were previously unaware, and the event has now been cancelled.

"The 'Gaza through my eyes' event – an exhibition of photographs taken by children in Gaza – shows a powerful perspective of life for a lost generation of youth growing up under blockade, and we look forward to working with the East London Mosque/London Muslim Centre to show the exhibition in future."

Notice also their hope to work with mosque in future, despite its notoriety for spreading hate and promoting terrorism.

Despite Oxfam's cancellation and seeming blind eye to the antisemitism, this story is also demonstrative of the curious allegiance between the Left and Islamic Fundamentalists, who trample over the very freedoms the former supposedly value and try to protect.