Palestine Press Agency reports that a Gaza family's house is uninhabitable because it was damaged during the flooding in Gaza last week. 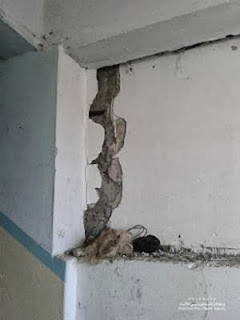 However, the damage wasn't directly from the rain or flooding. It was because under the house, unbeknownst to the family, was a Hamas terror tunnel that collapsed.

The house, which housed 45 members of an extended family including 20 children, saw parts of its ground floor fall a meter and a half into the ground.

Engineers hired by the family confirmed that there was a tunnel underneath the house. But when they complained to Hamas, the terror group held them financially responsible for tearing the house down.

This wasn't the only tunnel uncovered by the rain. Today I spoke with the person in charge of the Kerem Shalom crossing, and he told us that there were several visible tunnel collapses in the area from the rain. (More details of that interview to come.)