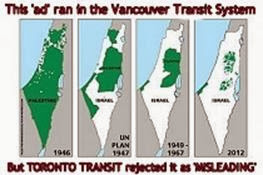 With transportation systems serving as a new front in the anti-Israel propaganda wars, Toronto Transit rejected an ad because it is "inaccurate and misleading."

"Disappearing Palestine" is the name of an ad campaign in Vancouver. Toronto rejected the ad as misleading.

It happened in New York City and Washington, D.C.  It happened in Denver and in Los Angeles. Transit agencies accepted virulently anti-Israel and misleading ads for billboards and posters.  In a few places, and only after great expense and perseverance, some of those billboards were removed, or at least countered. ...

But in something that seems to happen with increasing frequency these days with respect to Israel, Canada has once again pulled ahead of its southern neighbor in exercising prudence, obviating the need for private individuals to duke it out with the Israel haters. At least that's the case in Toronto.

Last week the Toronto Transit Commission rejected what it determined were inaccurate and misleading anti-Israel ads.

The ads were placed by the group Canadians for Justice and Peace in the Middle East.  CJPME looks to be very much a Jewish Voice for Peace clone - all anti-Israel, all the time.  In fact, the ads that were submitted to the various Canadian transit systems were the same as ads that were placed in several places in the U.S., including on transit signs in parts of outer New York City. Those ads were largely sponsored by a comrade-in-arms group of JVP, the Committee for Peace in Israel and Palestine.

The same "disappearing Palestine" theme also appeared in the fall of 2011 as part of the Starbucks Digital Network newsfeed through Starbucks Wi-Fi, which the Simon Wiesenthal Center protested at the time.

The general idea for the proposed Toronto ads tracked a series of ads that ran in a Vancouver, Canada transit station and on 15 Vancouver buses.  Those ads show 4 maps, allegedly revealing Israel as a voracious land grabber whose territory increases steadily over time, in direct proportion to a mythical state called Palestine.  The Palestine Awareness Coalition paid for the Vancouver ads.

According to the Canadian Jewish News, CJPME president Thomas Woodley told a Canadian Jewish magazine that his group raised $35,000 from private donors to run the ads in Toronto and other Canadian cities.

"We congratulate the TTC for making the right decision in rejecting the ads," said Frank Dimant, CEO, B'nai Brith Canada. "They carefully reviewed their own rules and put the ad into historical context to find that it was misleading and inaccurate and could lead to hatred or violence against supporters of Israel and the Jewish community in particular."

"We applaud them for the thoughtfulness that they brought to this issue and their strong stance for a fair reading of their advertising policy. In properly interpreting the law on free speech to understand that it does not include the right to spread false information, the TTC has not allowed itself to fall prey to the false anti-Israel propaganda campaign."

While Vancouver permitted the ads to run, the Toronto Transit Commission rejected those ads.  Here are the standards both entities were required to apply, Section 14 of the Canadian Code of Advertising Standards:

Advertisements shall not:
(a) condone any form of personal discrimination, including that based upon race, national origin, religion, sex or age;
(b) appear in a realistic manner to exploit, condone or incite violence; nor appear to condone, or directly encourage, bullying; nor directly encourage, or exhibit obvious indifference to, unlawful behaviour;
(c) demean, denigrate or disparage one or more identifiable persons, group of persons, firms, organizations, industrial or commercial activities, professions, entities, products or services, or attempt to bring it or them into public contempt or ridicule

A Toronto Transit Commission policy states that if at least five people complain about an ad, the issue goes to a three person advertising review committee, made up of TTC commissioners. After a review of the ad, if two of the three members oppose the ad, it is rejected, according to a Toronto newspaper, The Star.

The TTC made its determination to reject the CJPME ad on Friday, Oct. 19.