As a Jordanian, I was taught in school and at university that Israel is our first and last enemy. Why is this? People in Jordan (and almost all Arabs in the Middle East) think that Israel seeks to destroy them. It is common to hear conspiracy theories asserting that the decisions by governments of the United States, Russia and Europe that have adversely affected Arab countries can all be traced back to the Jews. Therefore, it is logical to conclude that if we stop Israel, or expel them from the Middle East, our situation will be better.

In the mosque, a prayer from the Imam asks for God to make widows of Jewish wives and orphans of Jewish children. It is common to hear the Jewish people referred to as "sons of pigs" and "killers of the prophets." In the street, to call someone "Jewish" is a heinous insult and may well end in violence. In the minds of most, nearly any problem in the Middle East can be traced back to Israel.

Peace on paper is not peace on the ground 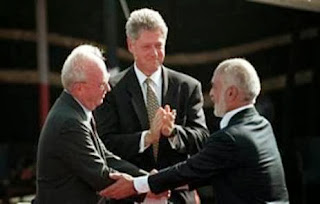 Despite a 1994 peace treaty between Israel and Jordan signed by the late prime minister Yitzhak Rabin and King Hussein, this agreement has yet to be put in effect in the hearts of the people of the neighboring countries.

As a Jordanian, I was taught in school and at university that Israel is our first and last enemy. Why is this? People in Jordan (and almost all Arabs in the Middle East) think that Israel seeks to destroy them. It is common to hear conspiracy theories asserting that the decisions by governments of the United States, Russia and Europe that have adversely affected Arab countries can all be traced back to the Jews. Therefore, it is logical to conclude that if we stop Israel, or expel them from the Middle East, our situation will be better.

In the mosque, a prayer from the Imam asks for God to make widows of Jewish wives and orphans of Jewish children. It is common to hear the Jewish people referred to as "sons of pigs" and "killers of the prophets." In the street, to call someone "Jewish" is a heinous insult and may well end in violence. In the minds of most, nearly any problem in the Middle East can be traced back to Israel.

One absurdity is that Jordanian cabinet members accused and blamed of corruption were suggested for their positions by Israel. An Israeli can't even drive a car into Jordan without having to change the license plates. A sticker on products that say, "Made in Israel" will always be removed before sale. Any Jordanian looking for a visa to travel into Israel has to wait months, and approval is never guaranteed.

And there are 26 Jordanian prisoners that I don't know when Israel will release, as a gesture of goodwill so they can return to their families.

My question is: How can we make real peace between us? Peace on paper is not enough, it needs to come from our hearts. I don't want to lie again when I introduce Israelis to Arab friends and say that they are American or Dutch. My heart aches for those on both sides who have lost loved ones, but when will we forgive and move on so we do not lose more brothers, sisters, sons and daughters? My visit to Israel showed me how close Jordanians and Israelis actually are – just a couple of hours – but in our hearts, more than 1,000 years. I truly believe that many of my Arab friends have an open mind, but traveling on the bus from Tel Aviv to Jerusalem, I posted on Facebook that I was pleasantly surprised for the free WiFi. Within minutes, there were nasty comments below and friends who I'd known for a decade or more blocked me on the site and deleted my mobile number. They called me to ask whether I was a spy and how much Israel paid me to say this.

My visit to Israel showed me how much work needs to be done to make one world between us – not merely a bridge.

When I crossed the border, I saw the opposite of what people told me. No policeman detained me for hours.

Instead, people were welcoming and one beautiful woman actually said, "Welcome to Israel Habibi." It was wonderful.

I took a taxi into Jerusalem and when I told the driver I was from Jordan, he responded, "Welcome for King Hussein and his people!" I asked him, "Why not King Abdullah II?" He replied, "Why not?" On the way, he invited me to drink a Pepsi and have a chocolate. He told me, "This is a gift from Israel to Jordan."

I said, "You are smiling and your welcome is a better gift."

We talked with each other about peace between us. He told me that he did not think there was a genuine peace if there are people who believe that war is the first and last solution.

I told him that I trust that there are a lot of people who believe in peace from both sides but keep silent because they are timid. We are afraid of the religious and traditional people who think that having a friend from Israel is unpatriotic.

When I arrived in Jerusalem it was Friday night, I had forgotten that it was Shabbat and was surprised over how empty the streets were and that all the stores were closed. I asked one of the few people I saw how I could go about buying a SIM card and they suggested I go to the Israeli Arab neighborhoods. There, I met Arabs who love their country, Israel. After I asked one of them his opinion about racism from Jewish Israelis, he told me, "If I am in an Arab country, I will not have what I have here. If I go to a hospital, I find all the services I need.

I have insurance because of my age. I do not experience discrimination."

The second day, I met Mickey. An Australian Israeli woman and mother with a sense of humor that never failed to lighten the darkest of conversations.

We discussed in depth the history and political issues of the Middle East and she expressed her hope to make peace with Arabs without violence. She said that this generation or a new generation might be able to find a peaceful way.

In a garden in Jerusalem, I met a religious Jewish man. He and his wife have nine children and he described each one as an expression of his faith and a gift from God. He said he loved having so many kids and he would always take care of them. I told him he was just like an Arab! I asked him about the peace agreement between Jordan and Israel and he said it was good but not enough. He said that when he went to Jordan, the police asked him, for his own protection, to change the license plates on his car and remove his hat. He asked them why he had to do these things and they simply replied that he could not receive a visa otherwise. I opined that the 1994 Peace Agreement was just between the authorities but that the hearts of the people are still in 1967.

An Israeli peace activist invited me to his home to meet and speak with more than 20 people. He opened the door for me so that I could understand Israeli culture through Israeli eyes and not through religious eyes.

Everyone in attendance welcomed me warmly, saying they had wanted to meet someone from Jordan for a long time and thought that I was their angel. They explained that a majority of Israelis do not seek enmity with Arabs, nor are they racist, but complained about a minority of ultrareligious people who do.

At the Hebrew University of Jerusalem I met with a professor who said he had a wonderful life growing up in Iraq, but being Jewish in that changing society became very difficult.

I expressed my frustration in finding a way to stop this hostility and to accept people as humans.

While there are a large number of people in Israel who want peace, there are those that are still angry with Arabs. An older religious man, who was defiant when he spoke about the grandfathers from Jordan who had fought in Israel, said he will believe in peace when it comes from the heart, when Arabs stop talking and encouraging their children to fight Jews.

There are people who have lost brothers, sisters or children in fighting and still want to make peace with Arabs. An Israeli named Jonathan said his brother was killed fighting Hamas in the Gaza Strip. "He pleaded not go to Gaza, to not kill anyone," Jonathan said. "But Hamas still fire rockets into Israel. My brother was both religious and peaceful."

Jonathan's father said he lost his own father in the Six Day War of 1967 and is still sad to think of how he was killed, there was no place his body wasn't wounded by bullets. Tears welled in his eyes when he said, "I still pray to God to continue to give me peace in my heart, to forgive, and give my children [the chance] to change this land for the better." Before I said goodbye, he encouraged me to be brave, to not quit, because this land needs peace more than water and food.

I believe the animosity towards Israel is over more than just land.

Arabs are generally happy to introduce friends from the US or England to other Arabs, despite being angry over the actions taken by these countries in the Middle East, but this would rarely happen with Jewish friends. Both sides have lost a great deal. Jewish people in the past could live side by side with Muslims in Iraq, Yemen or Libya, but after 1948, these Jews were blamed for the situation and life in these countries became more and more difficult.

Before 1948, Jewish and Arab negotiations took place between religious or military leaders, which meant that there was inevitably inflexibility on both sides and an inability to compromise.

But in the end, it was the general population that was made to suffer, including women and children.

What can we do in response to this situation? There are many issues that keep our law makers busy today; water resources, environmental issues, agriculture, unemployment, terrorism and border security. It would be better to concentrate our resources on health and science, for example, rather than weapons. We can attempt to heal this pain between us by exchange programs for university and high school students from both countries.

Allow them to visit, to study, to learn from the other. I would like to encourage my friends here in Jordan and cousins from my tribe to visit Israel and to meet real Israelis in everyday life, to break down the stereotypes they hold onto.

I will not be intimidated by organizations which seek to enforce a boycott on those who visit Israel. I plan to visit and meet my brothers and sisters in Israel again and to listen to them, to share with them, to learn from them and to fight with them against evil ideas. Religious and political groups are stuck in entrenched positions and are enslaved by vested interests. We can love each other without signatures on agreements. I have hope that our relations will be normalized in the future because I know many Jordanians, men and women, who greatly desire the relationship between the countries to be better. When we are able to visit each other, to listen with open minds and learn from our history rather than perpetually reliving it, only then can we give our sons and daughters a better future.

The author is a Jordanian journalist.