Reuters over de Tempelberg in Jeruzalem

Reuters vs. the truth about the Temple Mount

Jews call the raised ground at the eastern edge of Jerusalem's Old City the Temple Mount, while Muslims know it as the Noble Sanctuary.

Jews "call" it the Temple Mount, but Muslims "know" what it really is.

A senior Muslim official involved in the plan said one to two million foreign pilgrims could visit Al-Aqsa annually if access were free and unimpeded.

"It would protect Al-Aqsa and also provide an enormous boost to the Palestinian economy," he said. He asked not to be named because of the sensitivity of the issue.

Jerusalem was traditionally a stop for Muslims on overland routes to or from the annual Haj pilgrimage in Saudi Arabia.

What they found was a tranquil esplanade with two jewels of Islamic architecture, an elegant mosque highlighted by arabesque stained glass windows and the octagonal Dome of the Rock clad in ornate tiles and topped by a gilded cupola.

Millions could visit, just like the good old days before the Jews came along, right?

I've already shown how damaged and forsaken the Dome of the Rock was in the late 1800s and early 1900s in two web posts and a video.

But I found a color image of the Temple Mount taken in the 1950s, when millions of Muslims were free to visit as much as they wanted on the way to Mecca, or otherwise.

It doesn't look at all the way that Reuters makes it sound: (Click to enlarge.) 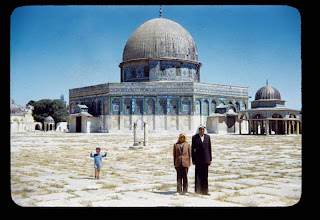 The plaza wasn't filled with pilgrims, but with weeds. And the Dome was in disrepair.

Does it look like Muslims were flocking to the "Noble Sanctuary"?

This is also where Judaism's two Bible-era Temples once stood, the first destroyed by the Babylonians in 586 BC and the second leveled by the Romans in 70 AD. The Western Wall, the last remnant of the second structure, is one of the most sacred sites in Judaism.

Oh, as an afterthought, a couple of Jewish temples also happened to be on top of that hill.

And what might the most sacred site in Judaism be, hmmm? Considering that this is an article about the Temple Mount, it seems as if Reuters is deliberately avoiding the tiny little fact that it it Judaism's most holy spot.

(Also, the Kotel is not the only remaining remnant from the Temple, as much of the entire western wall - far beyond the Kotel - and much of the southern wall are still there. )