The Department of Jerusalem Affairs of the Palestine Liberation Organization condemned the planned opening of an occupying Israeli police station in the Mount of Olives tomorrow in the presence of internal security minister and police chief of the occupation in Jerusalem.

The Jerusalem affairs department warned in a statement of the seriousness of this which falls within the planned Israeli settlement of the Judaization of the Mount of Olives east of the Al Aqsa Mosque.

Here's something that happened on the Mount of Olives last week that they didn't condemn:

Last Tuesday, several hours before he was to wed, a young bridegroom wished to say a short prayer at his mother’s grave on Jerusalem’s Mount of Olives. He lost his mother last year and a visit to the cemetery constituted for him her inclusion in his special day. He was driven up by his friend Dror Klein.

As they neared their destination, a bucket of white paint crashed into the front windshield, obscuring Dror’s view. A hail of stones followed.

In minutes some 30 to 40 young Arabs surrounded the vehicle, rocking it menacingly and hurling large rocks, cement blocks and broken pavement fragments at the two.

The bridegroom was dragged out of the car, a boulder was smashed on his head and he was beaten up to the sounds of Alahu Akhbar (God is great). Dror somehow managed to maneuver his Hyundai directly at the attackers. As they momentarily scurried, the bridegroom and his resourceful driver got away by the skin of their teeth.

The terse police statement later noted that “light injuries were sustained. The victims were evacuated to Sha’arei Zedek Hospital. The police are trying to track down the perpetrators.”

But the police know exactly where they came from. An Arab boys’ school is positioned directly alongside the road leading to the venerable ancient Jewish cemetery. The majority of incidents originate there. The attackers are generally teenagers and they often prepare ambushes well in advance. The fact that they had paint at the ready, along with arsenals of heavy rocks, betokens unquestionable premeditation.

Moreover, their violence is steadily ramped up to the point where fatalities should surprise no one. For years they stoned vehicles on their way to the second holiest Jewish site in Jerusalem. Gradual escalation has led to actual concerted lynching attempts. This isn’t esoteric information. 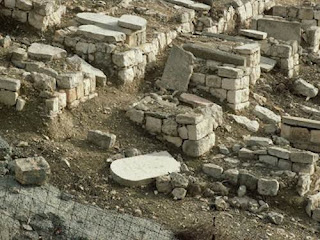 Predations occur daily.Headstones are hammered and graves daubed with paint and tar, smeared with human feces, covered in garbage and debris and defaced with hate inscriptions. Even the numerous graves of some of the most famous Jews throughout the generations aren’t spared this deliberate despoilment.

Particularly maddening is the fact that the persistent and exacerbated attacks at the Mount receive minimal resonance in our media.

Several ways exist of putting an immediate and effective end to the daily anti-Jewish assaults. The school can be closed down until ironclad guarantees are obtained that brutality from its grounds would cease forthwith. Any repeat aggression would lead to another closure.

Alternatively, the police can establish a permanent presence on the road to the cemetery both to protect visitors and deter their tormentors. This isn’t rocket science and can be achieved.

To allow unrestrained lawlessness at so sacred a site is what’s fundamentally unthinkable. Mourners should not fear for their lives at any cemetery anywhere in Israel, but all the more so at the most ancient continuously used burial ground anywhere in the world.

The Mount of Olives was already consecrated as the last resting place for Jerusalem’s Jews pre-First Temple days 3,000 years ago. It still serves that purpose. The only break was during the 19 years of Jordanian rule between 1948-1967. Not only were Jews barred entry then (in brazen contravention of armistice treaty obligations), but ancient irreplaceable tombstones were ripped out and used for the construction of roads, army barracks and – underscoring the intent to defile, desecrate and humiliate – as walls and floors of public latrines.

The Jewish return to an indisputably Jewish site is what world opinion and the Arabs now deem as “occupation.”

You will not find a word in Arabic media condemning the daily desecration and attacks at the Mount of Olives. But as soon as the slightest step is taken to prevent such attacks, the PLO - Israel's purported peace partner - is quick to deplore Israel.

Maybe they want to use the gravestones to build more latrines. I'm sure they can find some UN resolution that they can twist to make it sound like it is their sacred right.