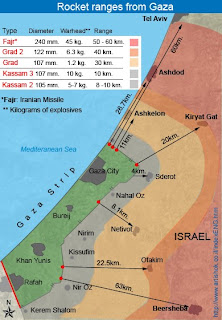 By YAAKOV LAPPIN AND JPOST.COM STAFF

A Grad rocket fired from the Gaza Strip landed in the Gedera area on Monday, marking the northern-most point hit by terrorists in the current round of escalation that began Friday and has included the launching of some 200 rockets by terrorists targeting southern Israel. A subsequent blast hit a residential area of Ashdod causing extensive damage to homes and injuring an elderly woman.

The Grad, which struck in the Gedera area, was one of 25 rockets fired into Israel on Monday. Some damage was caused to a structure in the attack.

At least eight of the 25 rockets fired on Monday were intercepted by the Iron Dome rocket defense system.

One of seven rockets fired at the Eshkol Regional Council area overnight fell near a kindergarten, causing damage to a building.

Five rockets fired toward Ashdod were intercepted by the Iron Dome rocket defense system later on Monday. An additional rocket exploded in the Ashdod area on Monday afternoon, causing damage to homes. An elderly woman was evacuated to Kaplan Medical Center in Rehovot after being struck by flying glass shards.

Another large southern city, Beersheba was also victimized by rocket fire on Monday. Two rockets landed in an open area outside of the city and a third rocket was intercepted by the Iron Dome.

The Home Front Command, along with the heads of a number of local authorities in southern Israel, decided Sunday night to cancel school in all towns and cities located between 7 km to 40 km from the Gaza Strip for the second straight day. The decision applied to the cities of Ashkelon, Ashdod, Beersheba, Netivot, Sderot, Kiryat Malachi, Gadera, Rahat, Yavneh, Lakiyeh, and the Gan Yavneh Regional Council.

The IDF continued to respond to the attacks with at least nine airstrikes launched against terror targets in Gaza overnight Sunday and on Monday.

Palestinian Islamic Jihad said that two armed terrorists belonging to the organization were killed in IAF strikes, bringing the total number of Palestinians killed since hostilities began Friday to 20.

Palestinians later reported that three Palestinian civilians had been killed in IAF strikes. Gaza hospital sources added that 25 civilians were hurt when an Israeli rocket hit a house in northern Gaza. The IDF did not confirm the Palestinian reports.

The IAF strikes carried out early Monday morning targeted a weapons-storage site and four rocket-launch sites in the northern Gaza Strip and one rocket-launch site in the southern Gaza strip. The IDF confirmed hits on its targets, and stated that the strikes were in response to rocket fire.

The latest round of violence flared on Friday when an air strike killed two Palestinian terror leaders in Gaza accused by Israel of planning a cross-border attack via Egypt. A salvo of rockets followed, leaving six people wounded in Israel.

Reuters contributed to this report.