Wikipedia, in the entry on Silwan, mentions:

In 1882, a group of Jews arrived from Yemen. Initially, they lived in tents. Later, when the rainy season began, they moved into the ancient burial caves on the east side of the valley.[12] In 1884, the Yemenites moved into new stone houses on the eastern slope of the Kidron, north of the Arab village, built for them by a charity called Ezrat Niddahim. This settlement was called Kfar Hashiloach or the Yemenite Village. Construction costs were kept low by using the Shiloach as a water source instead of digging cisterns. An 1891 photo shows the homes on an otherwise vacant stretch of hillside.[13] An early 20th century travel guide writes: In the “village of Silwan , east of Kidron … some of the fellah dwellings [are] old sepulchers hewn in the rocks. During late years a great extension of the village southward has sprung up, owing to the settlement here of a colony of poor Jews from Yemen, etc. many of whom have built homes on the steep hillside just above and east of Bir Eyyub,”

The Yemenite Jews fled for their lives from Silwan during the 1936–1939 Arab revolt in Palestine and non-Jewish Arabs moved into the vacated buildings. After the 1948 Arab-Israeli War, Silwan was annexed by the Hashemite Kingdom of Jordan.

Thanks to efforts by Robert Avrech of Seraphic Secret, here is a copy of the photograph of the Yemenite village of Kfar HaShiloach taken in 1891 (click to enlarge): 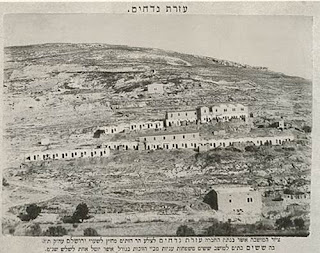 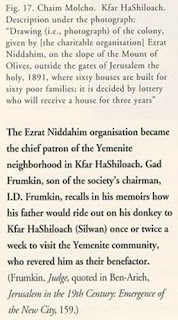 YNet, in a historic photo essay earlier this year, fills in some blanks and shows us a photo of the exact same area in 1932: 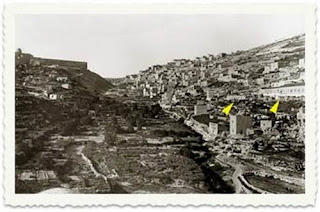 In 1882, Jews emigrated from Yemen to Jerusalem. As they failed to find room in the city within the walls, they resided in caves on the Mount of Olives slopes. The city's Jewish dignitaries rushed to help the Yemenite families, and Yisrael Dov Frumkin, owner of the Havatzelet newspaper, established the "Ezrat Nidachim" association which raised funds for the families.

South of the village of Silwan were non-constructed areas owned by Boaz the Babylonian, who donated them in order to build houses for the Yemenite Jews (marked with yellow arrows). The houses were named Kfar Hashiloach. Additional Jewish families gathered in the area, which housed up to 200 families.

In the 1921, Arabs attacked the neighborhood's residents, killed some of them and torched houses. They "completed" their work in the 1929 riots. The British Mandate authorities, which did not want any conflicts, ordered the residents of Kfar Hashiloach to evacuate themselves from the area.

Notice how much the neighborhood grew between 1891 and 1929.

So Jews were in this specific area for the 47 years from 1882 to 1929. They were expelled for the 38 years between 1929 and 1967. Israel has controlled the area now for 43 years. At least this part of what is now considered Silwan is being claimed by Arabs as their own, exclusive, area, and most of the world seems to agree.

Why does the world consider the anomalous 19 year period of when Jordan made the eastern part of Jerusalem Judenrein, or the scandalous time period when even relatively new immigrant Jews were forced out of their homes in the 1920s and 1930s, to be the "status quo?"